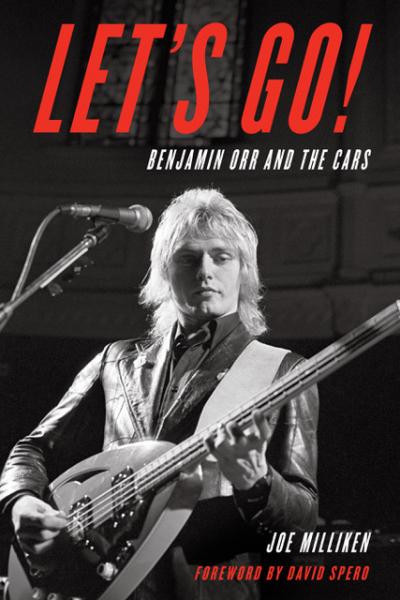 Often considered the band’s heartthrob, Orr possessed an incredible voice, diverse musical talent and rare stage presence, all balanced by a magnetic, yet enigmatic personality, striking good looks, and a relentless determination to reach rock stardom. Born Benjamin Orzechowski (aka “Benny Eleven Letters”) and raised in the Cleveland suburb of Parma Heights, Orr was, prior to becoming a world-famous rock star with The Cars, a “teen star” as a house band musician for the nationally syndicated television show Upbeat.

A few years later Ben met his musical partner and future Cars' bandleader, Ric Ocasek, and by 1976 their quest for the perfect blend of songs, bandmates, and musical landscape finally materialized as The Cars. They would go on to sell over 30 million albums worldwide resulting in 15 “Top 40” hits.

This first-ever biography about Orr spans 11 years in the making, as Milliken draws together interviews with over 120 family members, friends, bandmates, and music associates from Orr’s life, as well as many unpublished and never before seen photos from private collections, to reveal an intimate portrait of one of classic rock’s great talents.

About the Author: Joe Milliken has been a music journalist, editor and website publisher for two decades. A die-hard music fan with a degree in visual arts, Joe turned to writing as his creative outlet, first as a local reporter, then a sports/arts & entertainment editor and freelancer. In 2014, he launched Standing Room Only, a website dedicated to promoting music and the arts on a local (New England) and national level. Originally from Boston, Milliken now resides in southern Vermont with his wife, Kelly, and his children, Nate and Erin.

This launch event will include a slide show from Joe Milliken's extensive photo collection on The Cars prepared by Alan Fowler and some of The Cars music.

Be sure to let us know if you are attending this event so we can be sure to have an adequate venue.

OUT OF TOWN GUESTS WHO HAVE PRE-PURCHASED A BOOK ELSEWHERE and want a book signed - please expect to make a $5 or more donation for the Children's Literacy Fund.Village Square Booksellers is collecting book and financial donations for them this month.

Need a book shipped our right away?  We also have a Bookshop Site & earn a commission on all sales  Village Square Booksellers Bookshop

END_OF_DOCUMENT_TOKEN_TO_BE_REPLACED

BF3F (Bellows Falls 3rd Friday): 3rd Friday of each month, 4-7pm Check out the link to our facebook page for monthly details

Knitting Together: Every Wednesday 1-3pm. TBD

This feature require that you enable JavaScript in your browser.
END_OF_DOCUMENT_TOKEN_TO_BE_REPLACED

This feature require that you enable JavaScript in your browser.
END_OF_DOCUMENT_TOKEN_TO_BE_REPLACED

This feature require that you enable JavaScript in your browser.
END_OF_DOCUMENT_TOKEN_TO_BE_REPLACED

This feature require that you enable JavaScript in your browser.
END_OF_DOCUMENT_TOKEN_TO_BE_REPLACED